The Panthers Offense is Thriving Under Joe Brady

It’s no secret that Joe Brady was the man behind a lot of the success the LSU Tigers had in 2019. Before coming to LSU, Brady was an assistant at Penn State where he was with Joe Moorehead and in New Orleans with Sean Payton. Both Payton and Moorehead had big influences on what Brady believes in offensively, you can read more about that in one of my older articles. Brady’s offense has taken bits and pieces from both along with Steve Ensminger, LSU’s Offensive Coordinator. At only 31 years old, Brady’s success didn’t end when he left LSU. He has made a splash as the Carolina Panthers Offensive Coordinator and shows no signs of slowing down.

Joe Brady walked into a Panthers team that has a ton of talent on offense. Christian McCaffrey is one of the best players in the NFL, and a dynamic player both on the ground and through the air. DJ Moore is a rising star in the league. He brings speed and RAC ability to the unit. Curtis Samuel is another big time RAC guy who’s still figuring things out in the league. Robby Anderson was an offseason addition for the Panthers. He rounds out the group by bringing size and even more speed to the offense. Mike Davis has also done a nice job in relief of McCaffrey as of late.

Teddy Bridgewater came in to an offense with plenty of weapons and speed. DJ Moore, Robby Anderson, Curtis Samuel, and Christian McCaffrey all ran under 4.48 in the 40. So far, Anderson is the lead guy in the receiving room as he and Teddy seem to have a connection that they developed from their days with the Jets. Teddy Bridgewater is playing better than ever, Robby Anderson is having a career year, and the Panthers offense is firing on all cylinders without Christian McCaffrey. This is the Joe Brady effect being seen at first hand.

Brady had (and will still have) his learning curve early on in the season. You could see his youth on display in the Raiders and Buccaneers games. Since then, he has really come into his own and the offense is on fire. He has brought a lot of what he’s done at his past jobs with him, but with more of an NFL wrinkle to them, you’ll see what I mean soon. First of all, they are primarily in 11 personnel, like the rest of the world. 11 personnel means 1 running back, 1 tight end, 3 wid receivers. 12 means 1 RB, 2 TE, 2 WRs, and so on and so forth. Here is the breakdown of their personnel usage against the Falcons in week 5. 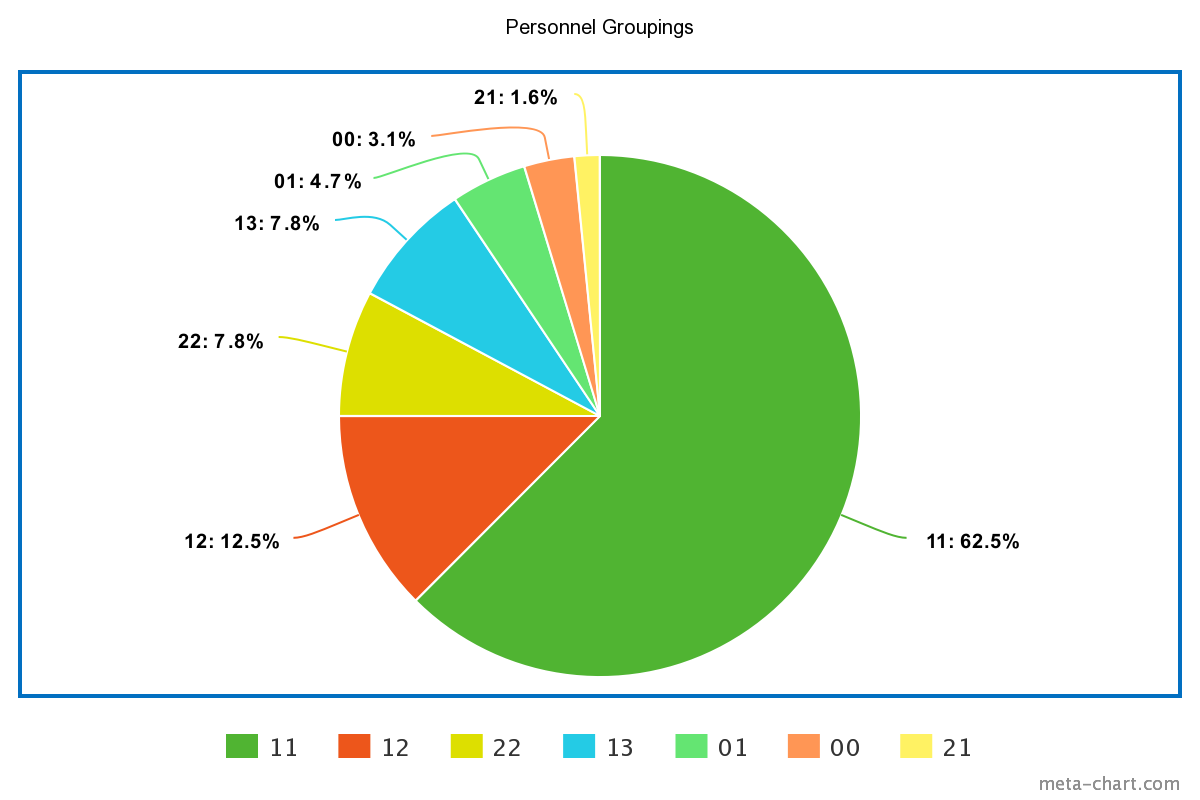 You can see the variety of personnel groupings used, even though they weren’t used that much, it keeps the defense on their toes and gets them into different looks. The Panthers were in “00” and “01” personnel more often this week because of the absence of Christian McCaffrey. Mike Davis has done a nice job replacing him, but doesn’t bring that same kind of speed. Curtis Samuel has taken snaps at RB, resulting in me charting it as “00” and “01” groupings.

Through the usage of these different looks on offense, the Panthers have been able to stay in rhythm offensively, something we haven’t seen in Carolina for a long time. When it comes to formations, it hasn’t been anything crazy. The Panthers have been in your typical doubles, trips, trey, TE wing, and empty looks along with some more. Empty was a huge part of the LSU offense in 2019 with Joe Burrow.

The Panthers have been in a lot less empty than LSU, but that’s because they need to mask some of their deficiencies on the offensive line. Compared to his days at LSU, Brady has also been in compressed sets less frequently than he was at LSU, so far. We’ve seen some of it, but not much because the tight nature of the formation invites easy pressures for the defense to send. The Panthers offensive line is a weak spot and the more they can avoid having to pick up a blitz, the better. Against the Falcons, Brady implemented a lot of split zone (inside zone with a TE sealing off the backside.)

The Panthers were able to take advantage of the Falcons over-aggressiveness to this play by faking the zone and having the TE/RB run a slice route into the flat. They abused the Falcons on this. Below will be a few clips of this. One where Brian Baldinger breaks it down very well and shows where coaching takes part in the play.

That brings me to my next point, Joe Brady isn’t doing anything completely new to the league. The offense is based off of timing and coaching. Take this dagger play for example. This was a staple last year in LSU’s offense along with many other teams in football. Curtis Samuel runs with good pacing, fast, but not too fast as he lets things develop. The subtle coaching points here that teach Samuel the pacing and cut of the route is what really separates some of the things they do on offense.

Along with the dagger concept that Brady loved at LSU, he also brought along the duo run. Clyde Edwards-Helaire made a lot of money because of this play. Brady runs this with McCaffrey, Davis, and even Curtis Samuel. The difference with duo now with the Panthers is Brady will run it a lot of times out of 12 personnel. It is a staple of their running game along with inside and mid zone.

Pre-snap motions and adjustments are still an important part of this offense. This has been huge in the Panthers offense because it’s a part of what’s letting Teddy settle into this offense. It’s what allows Brady to maximize Teddy and elevate his play. This back motion with a slant on the backside has been huge for the Panthers multiple times this season. The motion by the back take the linebackers and safeties eyes there and away from their spot drop where they would be defending the slant. This allows Anderson to win on a slant 1 on 1 here.

With the Texans and Falcons head coaching jobs opening up it’s no surprise to see Joe Brady being talked about as a potential candidate. Whether it happens this year or not, there is no doubt that Joe Brady is one of the best up and coming coaches in the NFL. He has adapted what he knows to the NFL and what the Panthers have on offense. He is a big reason as to why Teddy Bridgewater is playing so well. The Panthers are in good hands with Joe Brady.